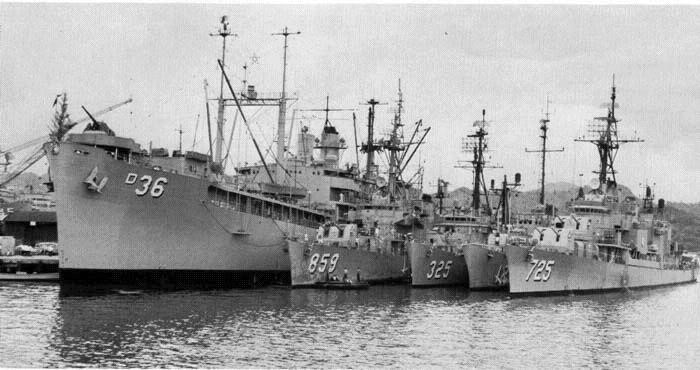 I have had several individuals comment to me about the USS Garfield County so I decided to also introduce the USS Bryce Canyon.  The Bryce Canyon, aka. AD-36, belongs to the family of ships known as Destroyer Tenders. She was launched on March 7, 1946. Being a casualty for a successful win in WWII, the Bryce Canyon sat with little activity until the start of the Korean conflict.  Commissioned on Sept 15, 1950, Captain MR Gerin took command and steered the vessel towards the Panama Canal for entry into the Pacific Fleet in San Diego.

From San Diego, the Bryce Canyon went to Japan to service ships harbored in the Japanese ports of Yokosuka and Sasebo.  AD-36 arrived in San Diego on November 18, 1951 for a 6-month port tour before heading once more to Pearl Harbor, then back to her home port.  In February 1953, the Bryce Canyon again headed for Japanese waters, only to return home in 1954.

During a fourth tour, AD-36 arrived in the Philippines before returning to Japan one more time.  Finally returning to the US west coast, she was given the home port of Long Beach where the Bryce Canyon continued to tour the US West coast.  She was decommissioned on June 30, 1981.

View all posts by Slader Matthew